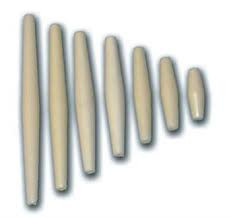 Bone hairpipe has a storied history North America.  Thousands of years before Bone Hairpipe became popular, tube shaped beads, often tapered at both ends, were used as decorative elements by first nations peoples. Some of the earliest tube beads were made from conch shells and were highly valued. Tube beads were also made from bird bones and copper during the prehistoric period. After contact with Europeans, first nations people received tube beads made of glass and silver. These trade goods were used as hair and ear decorations. The increase in demand for Hairpipe led to the need for a less expensive, more durable material.  In the later 19th century, Bone became the material of choice. Bone Breastplates became symbols of status and Necklaces and Bandoleers gained in popularity during the Reservation period.

This product hasn't received any reviews yet. Be the first to review this product!